On Thursday evening we were due to take our Latvian exchange student out for dinner before he leaves on the Friday (YAY to having the house back to ourselves again) but he decided to go and say goodbye to his school friends so we decided to treat ourselves to a meal out.

I went to the hairdressers on Baldwin street and then Si came to meet me afterwards and we sat in Start the Bus having a predinner drink and discussing options. Eventually we decided to try Masa, I’d read a reasonably good review ages ago and I’ve had teppanyaki at Matsuri before and knew it was going to be great.

We arrived and were greeted by the friendly staff, and after enquiring about the availability of doing some teppanyaki, we were ushered over to the grill. We surveyed the menu and chose the good value Set Menu 1 – £21 each for starters of sushi, tempura and miso soup, steak & salmon teppanyaki, veggies and garlic egg fried rice and a fruit/icecream platter to end.

Teppanyaki is a style where the chef cooks everything in front of you on a large grill – there is a certain style and theatre about it. 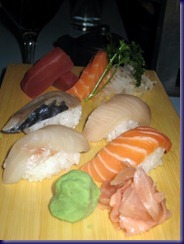 We started with some delicious sushi – fresh tuna and salmon plus some mackerel and hake nigiri.

And then moved onto some deepfried tempura veggies – not too greasy but the batter was very light and crispy – just perfect.

While we were eating, the chef came in with all sorts of exciting raw goodies.

And then he got started! The rice first which was a complete show in itself, with blazing eggs and super fast chopping. Followed by the steak, the salmon and the veggies. All of which was cooked to absolute perfection – pink steak and just cooked salmon. 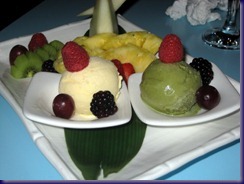 The fruit platter was delicious. And the boob effect only kept us giggling. The green ice cream is Green Tea ice cream which, unfortunately, tastes awful! It obviously uses matcha powder to flavour it and was horribly powdery and bitty with a nasty after taste. The only bad thing about this otherwise delicious meal!